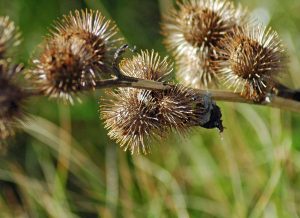 A study of Arctium lappa….common Burdock

“I passed by the field of the sluggard and by the vineyard of the man lacking sense,

and behold, it was completely overgrown with thistles;

its surface was covered with nettles, and its stone wall was broken down.

When I saw, I reflected upon it; I looked, and received instruction.

“A little sleep, a little slumber, a little folding of the hands to rest,”

Then your poverty will come as a robber and your want like an armed man.”

Burs and Thistles may seem like a curse as described in these scriptures but to an herbalist who appreciates the hidden blessings in burs and nettles they are rather celebrated. I hope by the end of this article you will look at Burdock with deep respect as a green blessing of great value.

Burdock is a delectable edible, an incredible medicinal, and diversely practical in a multitude of fascinating ways, is one of my most treasured weeds. The botanical or formal name for Burdock is Arctium lappa. These nicknames give hints into some of it’s famous characteristics: Beggar’s Buttons, Cockle Burr, Gobo Root , Stick Button and Snake Rhubarb

Before discovering Burdocks green blessings for myself, I only knew it for it’s annoying hitchhiker seed pod burs that would get stuck in my collie Skipper’s fur coat every Fall. Another one of nature’s ways of distributing the seeds far and wide.   Interestingly, these infuriating hooked seed pods became inspiration for Velcro as an ingenious fastener. Dr. George De Mestral, a Swiss engineer, inspected them closely under a microscope and upon examining their simple design of hooks and loops he developed and patented Velcro in 1951.

Burdock is a biennial which means its growth cycle lasts for two years. The first year the energy is in the tasty nutritious roots and the leaves are large like elephant ears growing like a rosette collecting energy to store in the roots. The second year the energy shoots up a tall stalk creating prickly purple flowers that morph into those irksome prickly seed pods. It is all about going to seed and then spreading the life far and wide. 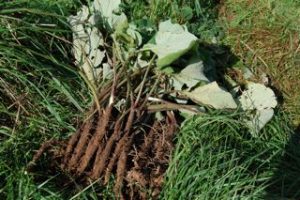 The Japanese have cultivated Burdock not as a weed but as a delicacy for hundreds of years. They call it Gobo root.   The best time to dig for the root is in the first year of growth or in the Spring of the second year before the energy shoots up a large seed stalk and the root is tough and fibrous. Once the roots are harvested and cleaned there are numerous tasty ways to prepare this nutritious delicacy. Sweet and Sour Burdock roots, Burdock in stir fries and stews, Burdock roots in a roasted casserole, Pickled Burdock roots, and Burdock Burgers is something I tried recently and they are fabulous…just about any way that you would eat or cook with a carrot works just as well with Burdock.

A decoction differs from a tea in that it is typically used to make a strong tea from roots, barks, seeds and wood.  A simple infusion would never extract the minerals and goodness from these green gifts.  So to decoct Burdock root, fill a pan with a quart or more of water, adding the Burdock root slices and boiling them (at first) and then simmering them till the liquid is halved and the roots are tender when bitten into.  Once the roots are al dente then you can make them into whatever your imagination can cook up.  I have made Burdock root taste like BACON just by taking these prepared roots and stir frying them in bacon grease to serve with Elderflower Fritters and Elderberry syrup.  I have also made them taste pretty close to Pepperoni by adding the same spices need to make Pepperoni to the cooked roots and simmering them in a bit of the Burdock pot liquor till marinated before popping them on your wild pizza!  Another fun option is to season these cooked discs with parmesan cheese and Chicken Piccata sauce to taste like mushrooms.

After decocting the roots to make them tender, save the liquid (pot liquor). It is delicious, rather mushroomy in flavor and can be added to soup stock for the enhanced nutrition.

The stems of a first year basal rosette of Burdock are an often overlooked wild edible gift. They are a bit stringy, like celery but with a bit of peeling they can be prepared to taste not unlike string beans. Boil them till al dente and smother with a Bernaise Sauce, or just butter and salt and pepper them to taste. Any of the stems of the Burdock plant can be enjoyed if it is tender, juicy and not rigid and stiff, thus with a discerning eye these petioles can be enjoyed throughout the Summer.

The Italians call Burdock, Cardoon, which means ‘edible stem’. They collect the stalks or stems of the first year plant in May. The thick juicy stem is like Rhubarb. Take strings off, steam a little bit, chop in chunks, bread them and fry them. They claim it tastes better than eggplant parmesan. Can’t wait to try this next May!

No. just. No. Some say these are edible but I am certain they have never tried them. Bitter is too kind a word for how they taste. Perhaps if you boiled them in 100 changes of water they might be passable but with so many delicious and delectable wild edibles why eat Burdock leaves…

My mentor Linda Runyon lived off the land for many years. She loved Burdock in all it’s offerings including it’s baby flower clusters. She claims that if you harvest them early enough they are not spiky and can be boiled to perfection and enjoyed as a pea. Again, I have never been that hungry and find the texture prickly even in it’s early beginnings. But feel free to experiment. 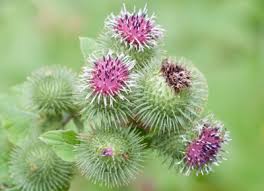 Burdock is a powerhouse of healing awesomeness. This is the classic case of letting food be your medicine and medicine be your food. The tastiest way to get the medicinal benefits of Burdock is to eat it but making tinctures of the root and the seeds has great healing value as well.

Among it’s vast healing benefits Burdock is famous for: aiding digestion due to it’s high fiber content, detoxifying the liver as a bitter, balancing hormones and the metabolism , reducing inflammation, lowering blood pressure with it’s high concentration of potassium which is a vasodilator relieving tension within the cardiovascular system, controlling diabetes with it’s high levels of insulin, lowering overall blood cholesterol, skin condition from dandruff, eczema, psoriasis, rashes…can be transformed from the inside out with Burdock mainly due to it’s ability to flush the liver and detox the blood. It is a main herb in Essiac tea, an effective herbal cancer treatment. Externally, the large leaves of Burdock can be used as poultices for burns or rheumatism. Burdock poultices improve blood flow to the injured and infected area, fighting infection and speeding healing…and SO MUCH MORE.

The Amish gather and dry Burdock leaves, storing them in their hospitals for use with burn patients. They are an anodyne (pain reliever) and dulls pain, antiseptic and kill germs, cell proliferants and multiply new cell growth, and they won’t stick to the wound.

Harvesting the seeds is a challenge. Herbalist Jim MacDonald recommends putting the seed burs in a paper bag, and then another paper bag, then a contractors black trash bag and then drive over them with car tires… Then be super careful not to get those nasty stickers into your skin, if you do get prickled like a porcupine use duck tape to remove them.

Plates: My foragers always collect large Burdock leaves to use for their dinner plates for our wild food feasts.

Fans: During hot Summer months a Burdock leaf can morph easily into a cooling fan

Baggies: Ever wonder what people did to carry lunch to work before the invention of baggies? Dock means large leaf and Burdock leaves can be elephant ear size! Wrapping food in a large Burdock leaf kept food fresh in haversacks for centuries.

Bandages: Using Burdock leaf over a wound is not only a way to protect it but it’s powerful constituents also aid in the wound healing.

TP: never tried it but…why not?

Teething: Native American women used the fresh Burdock root and strung it for when the young ones were teething. It worked to quiet them down and soothe their gums.  I wish I knew this when my kids were babies, it sure beats the plastic toys we give them to chew on.

Deflea pets: Simmer a handful of brown burs, strain and cool. Use this infusion to wash your pets and kill fleas quickly!

Poop patrol: My neighbor JD picks up his dog Foscoe’s poops with Burdock leaves to keep our yards poop free!

If digging is not your thing, take an old bale of wet hay and knock together four 1 x 4s like an empty-bottomed flat to fit right on top of the hay bale. Then fill this with garden soil and plant your burdock seeds in there. They will germinate and send their roots down into the hay. To harvest, remove the boards and pull apart the hay to reveal perfectly formed and tender burdock roots.”  I have never done this but it is on my bucket list for sure!

So now that I’ve enlightened you as to the phenomenal gifts of Arctium lappa: it’s edibility, powerful medicine, usefulness and playfulness perhaps you agree that these annoying burrs are a worthy reminder of God’s Goodness and Provision for us.  I am grateful for their ingenious method of hitchhiking on a passing pant leg or four legged furry animal to spread it’s life far and wide.

Bring on the Wild Blessings! 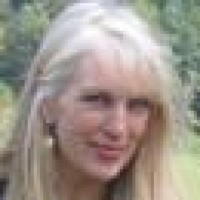